Lidl’s Amazing New Healthy Range …… OR IS IT? 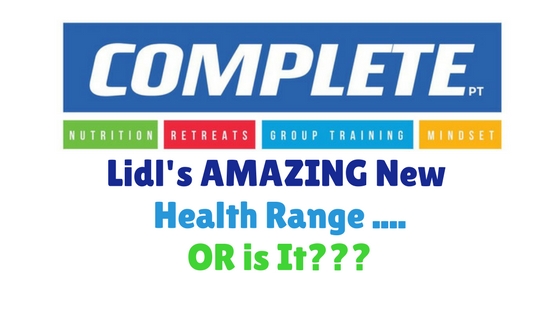 At first glance, when I saw that Lidl were launching a shiny new healthy range, I must say I was excited at the prospect of a large chain adding weight to the health and fitness push that the people of Ireland are now embracing more than ever.

Before I start reviewing their “healthy” brands from a health point of view, I must admit, I shop there and in Aldi every week. I think they are great stores and are helping drive prices down for Irish consumers, even if they are not Irish themselves, this can only be a good thing for the average Irish family on the bread line in my opinion.

Value for money is great and I also find the quality is generally very good too. These views are all my own.

Now, the new high protein and health range has it’s pros and cons, lets dive in and check them out.

Pasta is something I do enjoy from time to time, but rarely do I have it, as the after effects are just not worth it. Bloating/Lethargy etc.

I have tried the pasta and have enjoyed it I must say, but I am also not that fussy and I have my ways of tanging bland food up and if I know something is helping me reach my goal of optimal fatloss and health, my tolerance levels go up, probably sub consciously (shooting straight apple cider vinegar every morning and evening is a testament to that).

It doesn’t particularly taste like pasta, but do we eat pasta for the taste of the pasta or for the texture and the sauce and bits we have with it? Hmmmm, I wonder. You can get a distinctive taste of peas from it but you would, being made of nothing but peas…

This one initially floated my boat I must admit. It is supposed to be a replacement or healthier version of the infamous Nutella. At first glance this looks great, No Palm Oil, No Added sugar, higher protein, all the deliciousness of Nutella without the crappy ingredients, this could be an awesome product.

Well, when I dug a little deeper. There’s a few things to be aware of.

Good but a little gritty from the protein. Probably a better alternative to Nutella from a health perspective.

Sunflower oil- A very processed oil that can cause inflammation. Not something I would be consuming on a regular basis.

Maltitol- This is a Sweetener used to sweeten products. It is a sugar alcohol, with less calories and less absorption than sugar. It still is a carbohydrate, generally considered safe for consumption, but processed none the less. Excessive consumption may cause a laxative effect.

As protein bars go, it has a decent nutrient profile. My big problem with protein bars is the vast amount of processed ingredients they use to make them. Sugars, processed oils, refined wheat flours, Glucose Syrup. Unfortunately, this is no different.

Ingredients to be aware of :

Too many to mention and extremely processed

Again, a gluten free pasta is always appealing to me being Gluten intolerant. (along with roughly 80% of the rest of the population). Nice and easy to prepare. I’m always a little wary of the phytates contained in legumes such as chickpeas which can prevent the uptake of nutrients.

Good taste, slightly different to regular pasta as you would expect.

Those who follow me, know I’m a massive fan of coconut oil. There is (as always) cheaper versions that come on the market. Lidl’s version is slightly more processed (how do they take the flavour out?) than organic cold pressed versions which are more expensive.

The thought of a bread with increased (18%) protein and reduced carbohydrate (60%) does appeal to me. However, even though the ingredients don’t look too bad, if you are Wheat tolerant that is, anything that sits in a packet is not ideal.

As you would expect, it tastes of bread sitting in a packet and quite hard. Kinda dense and chewy

Soybean Meal- Most likely processed at a high heat, something that may cause inflammation.

These actually have a good nutrient profile and not much sugar (mainly from prunes and honey). They are not too sweet and are a good option to fight off a craving for something far worse.

Decent, but not amazing

Almond milk is a great dairy alternative, but can take a bit of getting used to. It can often contain some poor ingredients, but this is relatively good as far as Almond milks go.  No added sugar and low in carbohydrates.

Guar Gum- Used to thicken liquids. Can increase flatulence initially but there is no worthwhile studies stating it’s harmful

Another alternative to Dairy. Low in carbohydrate but slightly higher than the almond milk because of the rice flour.

Guar Gum- Used to thicken liquids. Can increase flatulence initially but there is no worthwhile studies stating it’s harmful for human consumption

Will any of these become a staple of my diet? The answer, yes. I stock pile the pea pasta when I see it because I like it and it makes me feel full and repleat. It is also seasonal and comes and goes in the stores. It is low in starchy carbs and that’s how I function best.

I will also buy the almond milk as I use it as a direct replacement for Dairy. The Coconut milk to a lesser extent, just from a taste point of view.

Many of the others…?

No, I don’t think so. For others, they for sure could fit into a reasonably healthy balanced diet. The main thing is to not fall into the trap of because they are “healthy” they are a free food that you can consume at will.

Remember you gotta burn more than you are consuming as a fundamental rule of fatloss.

Enjoyed the article? Please share and send me your feedback.